Navigation Menu
Home » How? » How does perspective relate to truth?

How does perspective relate to truth?

There are two ways to approach perspective: From the concrete and the abstract.

01The abstract can be defined as a kind of thought experiment that cannot be grasped with our direct senses (to touch, listen, smell, see and taste). One could imagine the experience as if it were felt with our senses, but there is a space between the thought and the physical that persists.

02Whereas the abstract is intangible, the concrete is something that you can grasp with your senses. It goes beyond a thought experiment because I can let other people see what I mean directly and physically.

For example, the concrete would be adding 1 apple + 1 apple placed in front of you. The abstract would not have the two apples present, but you would sum these numbers inside your head as a form of abstraction. It is very easy to confuse the abstract from the concrete because you might think that you are actually adding two forms of the apple inside your head. However, concretely there are no physical apples in front of you.

Therefore, we have identified two different forms of knowing: what I know abstractly and what I know concretely. Now, what does this have to do with perspective? Well, perspective is needed whenever dealing to understand the truth. We could assume that the truth is invariable. It is definite and even concrete, but is it?

To answer I would have to know if your notion of truth as invariable is concrete or abstract. Why? If it is abstract, then are assuming the existence of the truth of ideas as real? If it is concrete, then would you negate the truth of an abstract such as it is done in mathematics?

Do you see the problem with an invariable truth? Now, let’s suppose a variable truth. Then, I would ask: Is there a truth at all? If it is variable, then how can we ever be certain there is truth? Certainty would make truth invariable. So, in order to solve this problem let’s find a balance between these two possibilities: Variable truth and invariable truth.

Here are two other examples:

Therefore, truth is in a constant flux between concretes and abstracts. Once something becomes an abstract, we reach something that affects our notion of truth: Our assumptions which define our perspective. 1

So, how can I know what is the truth if the perspective affects the way I define my experience through my set of beliefs and assumptions?

If you think you do not have assumptions, think again. They are implicit in the framework of your discourse. Other synonyms of assumptions are: methodology or conceptual framework.

I do not assume that one of these perspectives in the form of a methodology is the unique truth nor I am assuming that there are many truths. I am making us aware of the fact that assumptions lie behind any concept of truth. These assumptions are the ones that provide us with a particular perspective that can be contrasted to the truth. These arguments shape our concept of reality. That is the reason we need to focus more in the assumptions that underlie our experience.

For example, there is a battle between those who believe in a God (as written in the Bible) and those who believe in Charles Darwin’s Theory of Evolution (as a scientific consensus). This battle will never end because there is no actual reasoning. The underlying assumptions are taken as face value.

Both assumptions are trying to answer: What is the truth? The only way to end this battle is to stop assuming the truth of both the Bible/faith and the Scientific-Method/logic. There has to be a suspension of that assumption. If there were no Scientific Method nor Bible, then what would be the truth? You might say this suspension assumptions has no real value, but at least it will allow you to see things outside from your historical perspective. 3

Imagine that in a 100 years from now it can be proven that both “theories” are wrong. Then, why did all this fighting going on? If you are emotionally invested in this discussion, you will surely blame the other side. You are just being logical, that your theory will be always right, or that your theory has not been proven wrong, etc.

You might be surprised that once you understand the other’s person perspective fully, you might stop being emotionally invested in the quarrel. Also once you understand your assumptions, you will begin to see the limits of your argument. You could try to extend those limits, and make a better argument.

Ultimately you might not convince stubborn people, but you will have become more tolerant.

If one is not aware of the foundational assumptions, then such truth is contingent to the historical context. But if you become aware and explicit of your assumptions, you are making it easier for your concepts to be stronger arguments because others could change the methodology for a better argument.

If I define clearly my assumptions, then I appear to have a strong argument. However if one of my assumptions is false then my whole reasoning could be void. 4

The less I assume = the more broad is my argument and the easier it is to debunk it or narrow it by applying different methodologies, that is different perspectives.

However, being so explicit also allows the argument to be destroyed faster if its underlying assumptions are not true. Do not be discouraged. If you really know your assumptions, then your argument can be rectified at ease. 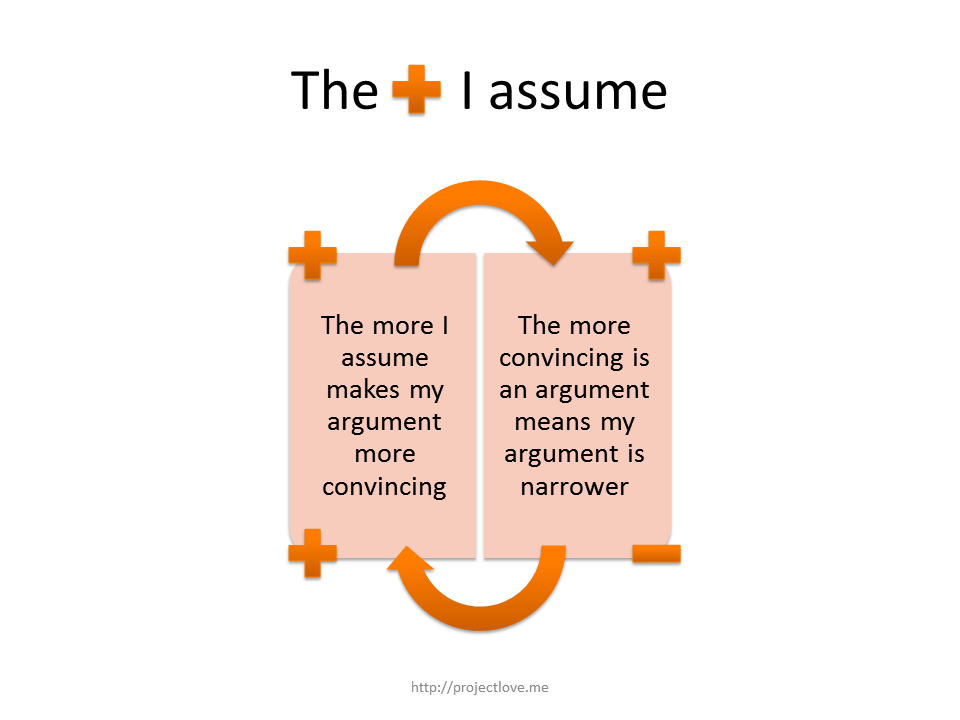 Wouldn’t it be nice to know faster what is wrong with your ideas in order to create new and better ones rather than spending your time defending something that will not ultimately survive the test of time?

That said, you do not have to prove that what you say is true insofar you acknowledge your weaknesses and are willing to rectify as new evidence (such as a different perspective that you had not previously thought of) is put forward.

Remember: Do not let your pride get in the way. The truth is beyond your pride.

If we had to prove everything, then a lot of scientific theories would not exist such as quantum theory. This theory in broad terms approximates to truth through probability or induction. As you can see, the truth is a concept very difficult to define. In our historical context, we can only approximate to truth. 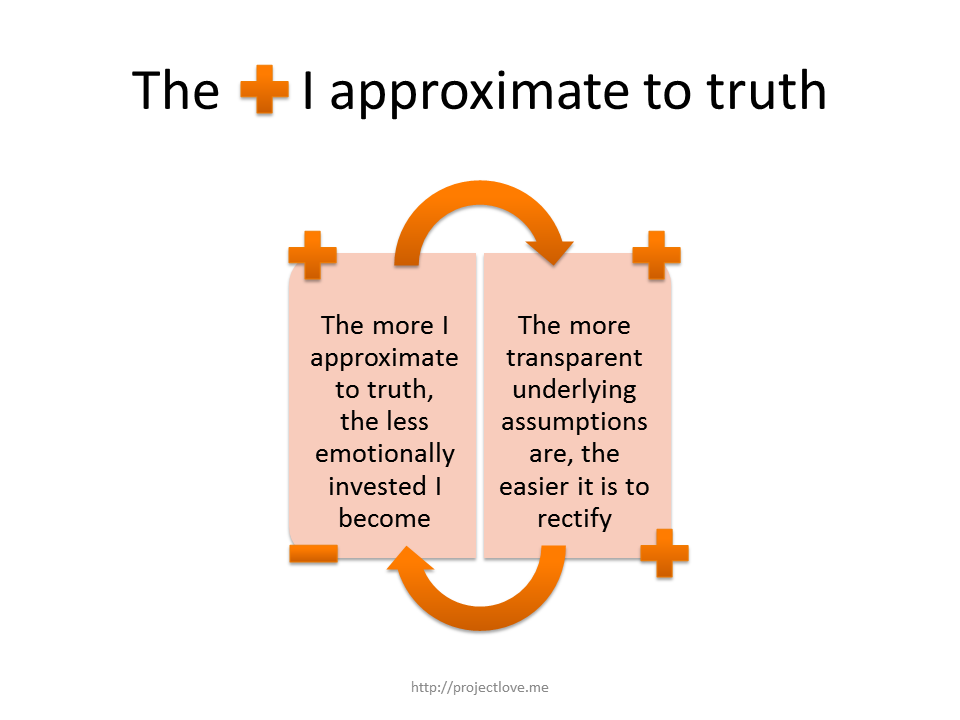 The more you approximate to the truth, the more transparent your underlying assumptions are.

Therefore, do your best. Stand strong if you feel it is the right thing to do. Some ideas are too advanced for a particular historical context, and as a consequence, these ideas will be rejected no matter what.

Sometimes it is not about the truth, but about being right in a particular time that does not want to hear the truth. Stay still. Wait, be patient, keep working, but try not to be foolish trying to impose yourself and your ideas on others. Let it be. Once it is time for your idea to flourish, no historical context will stop it.

So, how does perspective define truth? It does and it does not.

It does not, if you decide to become more and more aware of your set of assumptions and your belief system. It does, if you let truth be defined through a perspective that does not acknowledge that assumptions sustain its foundation. How far do assumptions go? I would guess that a very long way…

The more assumptions we expose, the better off humanity will be because we will actually be moving forward rather than running in circles.

Further reading:
Another form of truth in philosophy that is not based in formal logic but an unconcealing, a revealing.
An introduction to the Scientific Method
Definition of three different types of reasoning: deductive, inductive and abductive